Sweet Potato Burgers for the Win

Georgia born and bred, this gal is a Trisha Yearwood fan. A little "Georgia Rain" will have me all up in some feelings. Not only is she a country music institution, but Trisha is also known for one of my favorite food "genres," lighter Southern cooking. Her Unfried Chicken recipe is what inspired my Lemon Pepper Baked Chicken Tender recipe that turned Cliff from a skeptic to a convert. Poor guy, I'm always testing non-traditional flavors and methods on traditional dishes that he would love. But, he always takes a bite (albeit, nervously) and then dives right in...so I think it's all good. 🙂

On days when I don't feel much like creating a new recipe from scratch, I love to try others that I can analyze for you and hopefully give you some new ideas for your arsenal. I'm happy to report that her Smashed Sweet Pea Burgers are a great addition to the recipe rotation. First, you get to smash ingredients and take pent-up frustration out on the sweet potatoes and chickpeas. Second, you feel good about making healthier choices. And, lastly, it tastes good...which is all that really matters, right? I'm not sure why Trisha calls them "Sweet Pea" burgers, but I prefer to imagine it represents the loving term of endearment that us Southern gals grew up hearing from Grandma.

Sit down and take a load off; this is gonna take a while. Kidding, of course. Here are a few of my favorites: 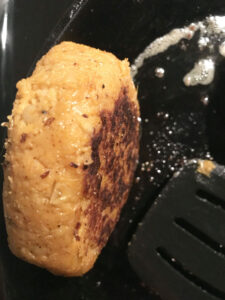 Before removing from the pan, I flipped the patties on their side and cooked them by slowly rolling around the edge of the skillet.

As a general rule, I don't think much modification is necessary. These are perfect as-is, or with a few of your own adornments. What I did add to the mix was about 1 tsp. of garlic powder (because I have a garlic obsession) and increased the amount of salt and freshly ground black pepper.

Next time, I would like to try adding some dried minced onion and even get a little crazy with some Worcestershire sauce. Sure, that might make them taste like mini meat loaves, but is that really a bad thing?

Since there are a few carbs already in the dish, thanks to the sweet potato, chickpeas, and bread crumbs, we decided to forego actual burger buns. Instead, I chose to slice some red onion and place the burger and onion on a leaf of romaine lettuce (ultimately, topping with mustard). The red onion can be a bit difficult to cut when on top of a burger and I was concerned the softer nature of the sweet potato burger - since they are not bound by the gelatin found in traditional animal meat - would smash the burger and compromise its structure. I think it would have been fine on top, but still like the modification for some reason.

While cooking the burgers, I decided to firm them on both sides and get the desired crust. But, before removing them from the skillet, I decided to flip them on their side and rotate the burgers around the "walls" of the skillet, in order to make the edges a bit more crispy. Again, my goal was to make sure they didn't fall apart the moment we took our first bite.

Also, I added a little more salt and pepper to each patty while they were cooking in the skillet, and on each side before I flipped them.

Salt and pepper to taste (I used about 1 tsp. each)

A Few Notes as You Cook

If you need to make the sweet potatoes while at work, you can cook them in a slow cooker. Just combine the rest of the ingredients when you get home and cook in the skillet.

Do you love sweet potatoes as much as we do? Let me know what other ingredients you would incorporate in these, if any, to adjust them to your preferences. Until next time, cheers to your #hearthhealthhappiness!