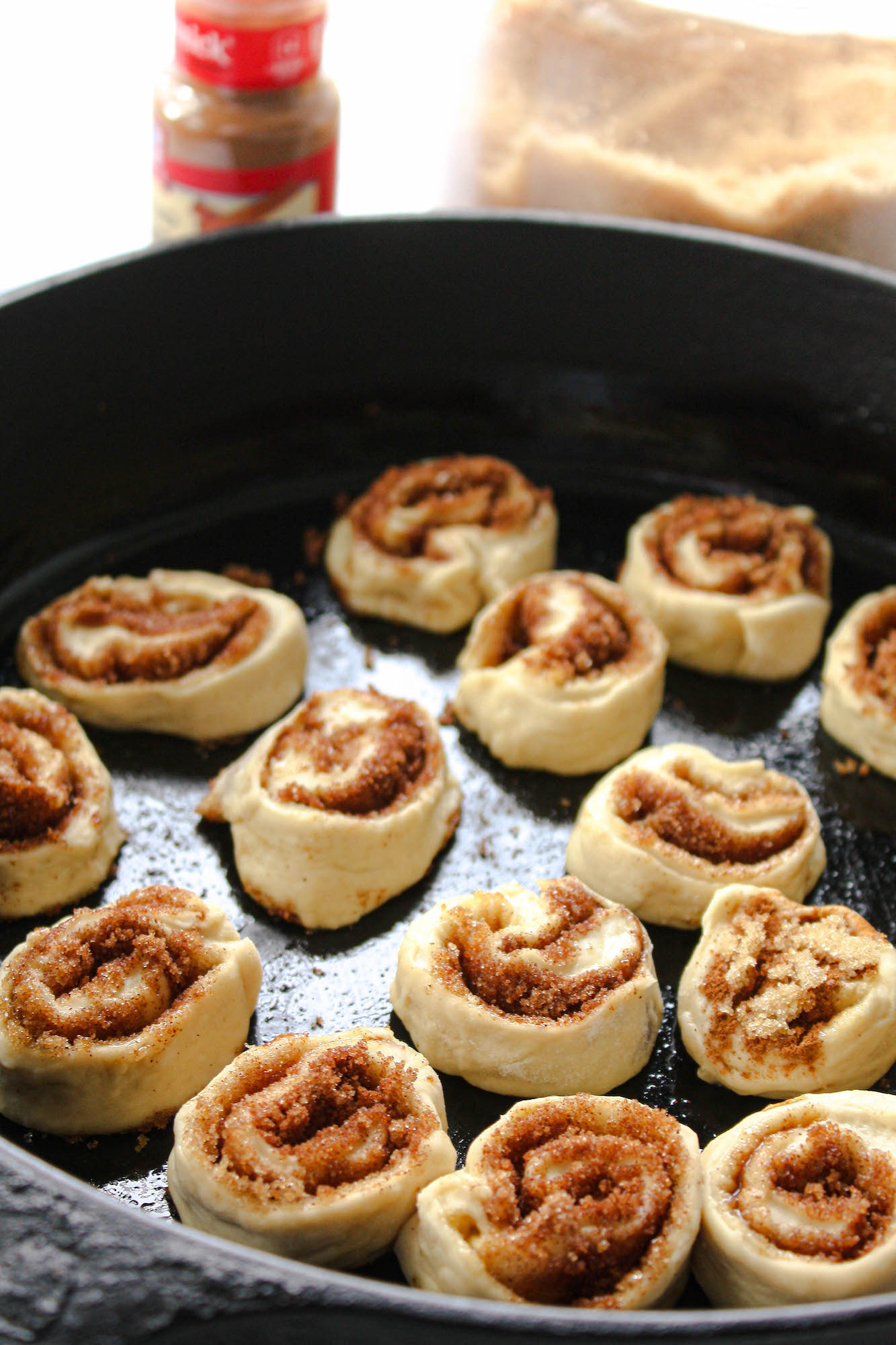 Add a header to begin generating the table of contents

Why have one (or two) large cinnamon rolls when you could have several adorable mini cinnamon rolls to satisfy your sweet tooth? When I made these, I *foolishly* thought I would show self-discipline and only have a few to get a hint of sweetness and then move on with my evening. Nope. Instead, Cliff and I both ended up eating 4 of 5 at a time. Great sign, right?

Picture little pinwheels that offer a delicate yet firm crust, with a burst of "ooey gooey-ness" that makes cinnamon rolls so much fun. These little guys make me feel like I'm a child again, even though these can be enjoyed at any age! I had a little leftover pizza dough from the rustic cast iron skillet recipe last week and decided I wanted to make either a dessert pizza or cinnamon rolls. These mini rolls won out, but I do plan to make a dessert pizza soon, so stay tuned!

Choose the size you prefer

If you prefer larger, full-size cinnamon rolls, that's fine! I would suggest making just a few with the amount of dough you have on hand, or make a full batch of pizza dough and use all the dough for the cinnamon rolls. It's totally up to you! I like this mini cinnamon roll recipe because you can grab a handful for a lunch dessert (yes, that's a thing for me), or easily incorporate into your breakfast. If you are creating a breakfast buffet or cheese board, this size would be ideal to allow guests the opportunity to sample a little of everything. And, yes, I am the guest that will sample everything. Moderation took me a long time to learn, and is still hit-or-miss for me on any given day. 😉

Flip the cinnamon rolls over after they've finished baking to let the shiny "goo" be the first thing your hungry friends see. You can sprinkle with toppings of your choice, like nuts or actual sprinkles if kiddos insist. 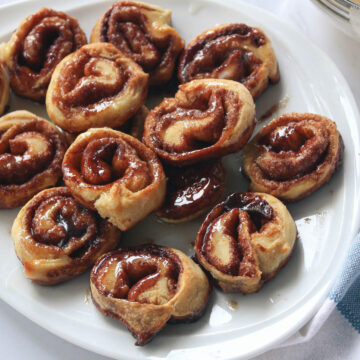 This recipe creates more glaze than is needed for these cinnamon rolls. You can easily store for later use (stored up to one week, refrigerated).
Keyword baking, breakfast, cast iron skillet, cinnamon rolls
Tried this recipe?Let us know how it was!

Cinnamon rolls can be made SO many different ways - some prefer really fluffy; others, with a nut-filled center and topping...the list is almost endless. How do you prefer yours? Do you enjoy cinnamon rolls for breakfast or dessert - or whenever? If you need some inspiration for a breakfast buffet, try some "sunrise" cheese boards with finger food that will get the day started off on the best note ever.

Until next time, enjoy these mini cinnamon rolls (have a handful for me!) and cheers to your #hearthhealthhappiness! 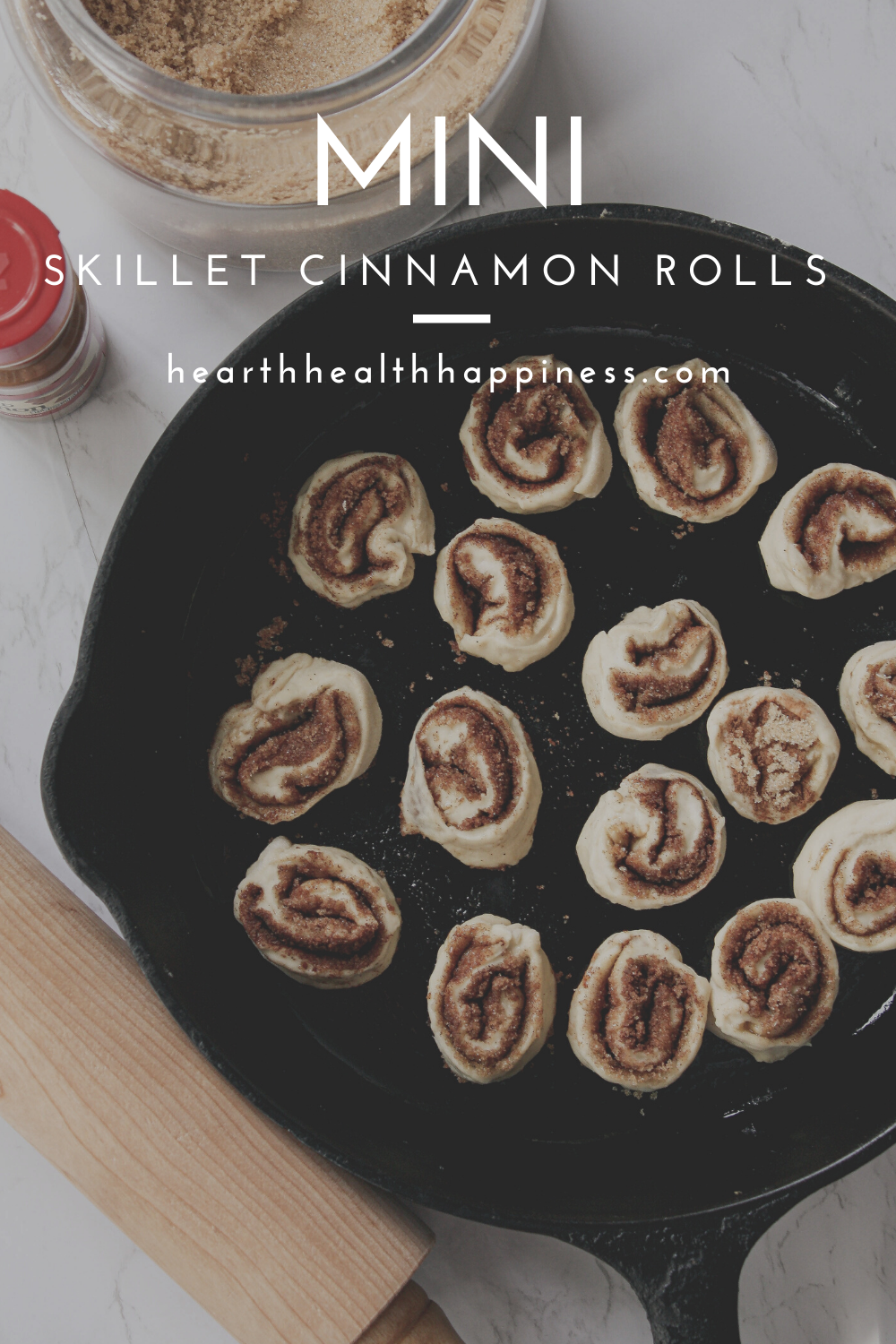